This dashboard uses DataMaps for the mapping solution, MongoDB as a database, Java Spring as a backend and Javascript/jQuery/d3.js code for front end.

If you are interested in technical details about what type of plugins i used? How i customized them? How i used different plugins? How i tackled a lot of problems then scroll down to the detailed technical information section below.

Feel free to contact me at [email protected] if you want to discuss any project i can create for you based on your needs and data. I am always looking for freelance or consultancy based work/projects so feel free to drop me an email and we can discuss from there.

You can find the actual visualization at the link http://bit.ly/2HSeHEj. Also, you can see screenshots and more information at behance here

NOTE: You are welcome to share this dashboard with others but if you want to use any part of this dashboard for your own visualization please contact me first to get permission.

My name is Jawad Rashid. I work on multiple roles as Data Scientist, Web Developer & Game Developer in my company nData Consulting. I love to work on data visualizations and interactive dashboards along with working on interesting problems in AI and machine learning. The reason for making this dashboard was to showcase my skills as a Full Stack Web Developer and as a Data Scientist. Also, one main reason for me to do this dashboard was to learn more about d3.js v5 and use DataMaps in a project. I will be making dashboards like these in the upcoming weeks using technologies like React, Vue.js etc, along with multiple d3 based libraries like nvd3 with different types of backends like ruby on rails, python frameworks etc with different databases. So stay tune for more dashboards from me in the coming weeks. 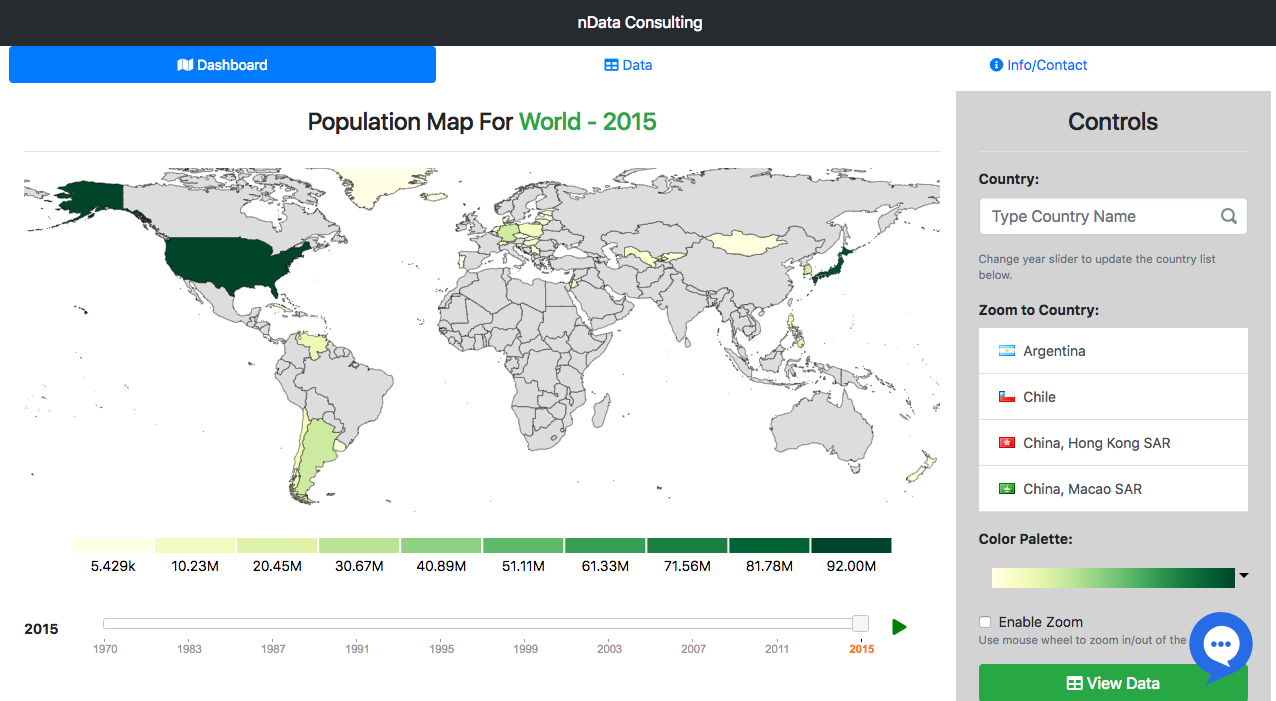 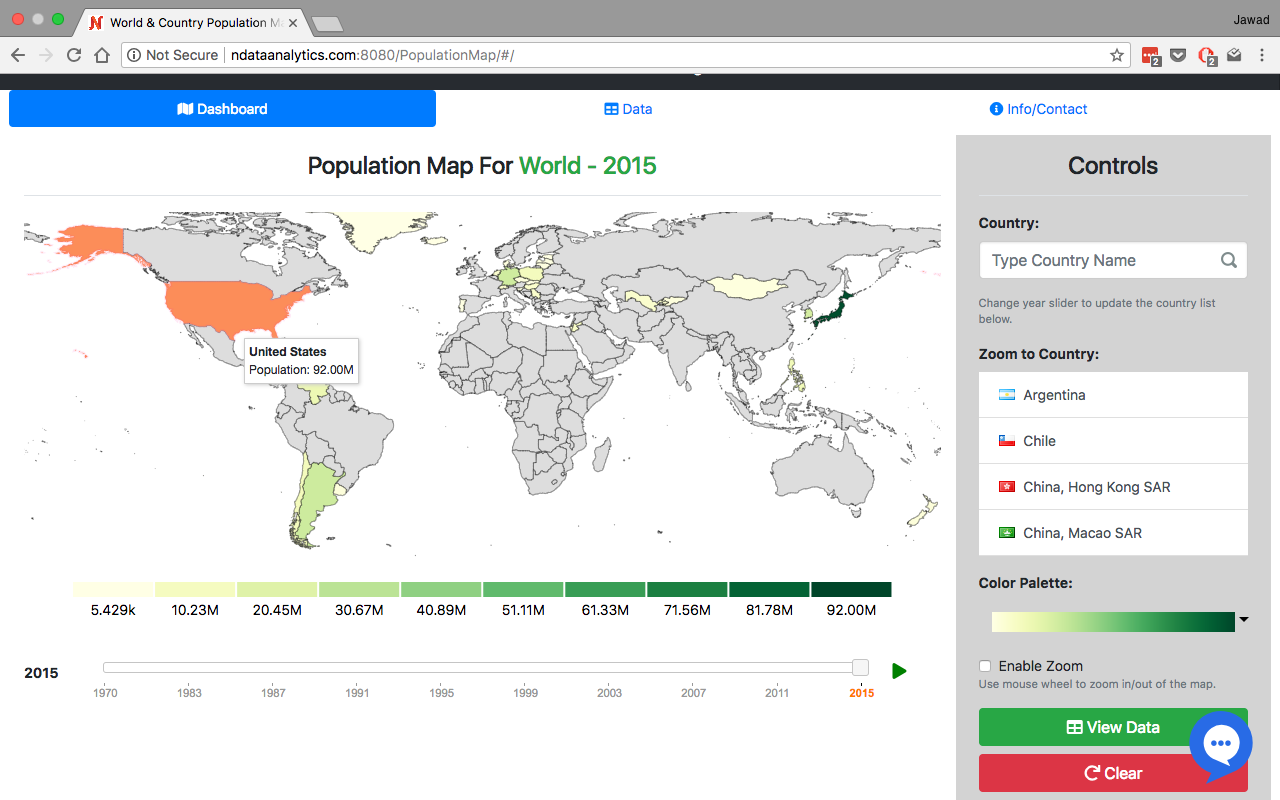 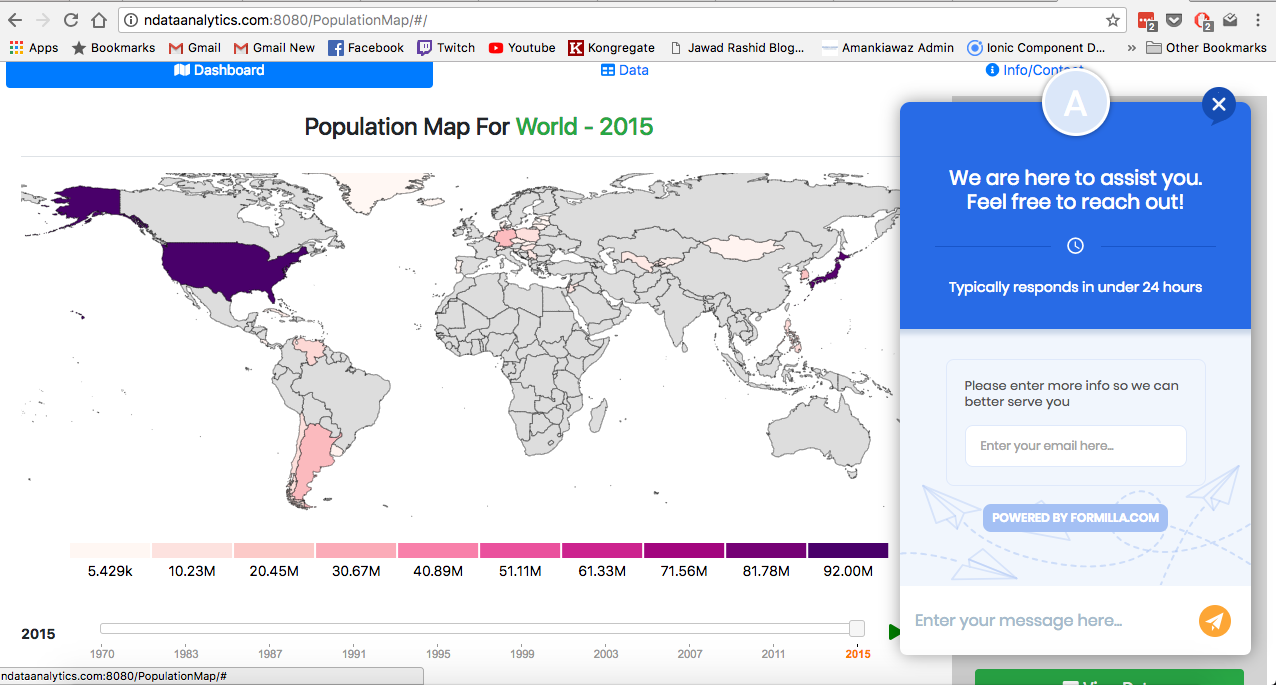 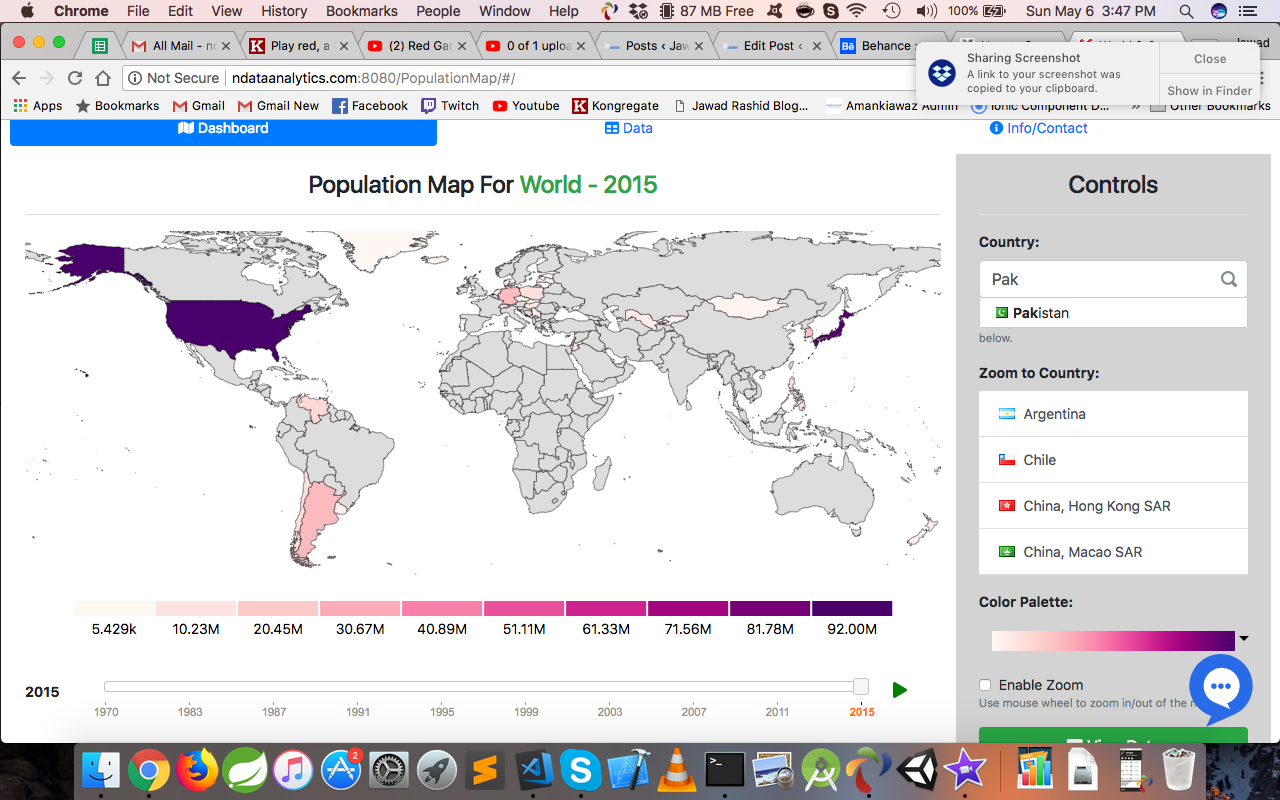 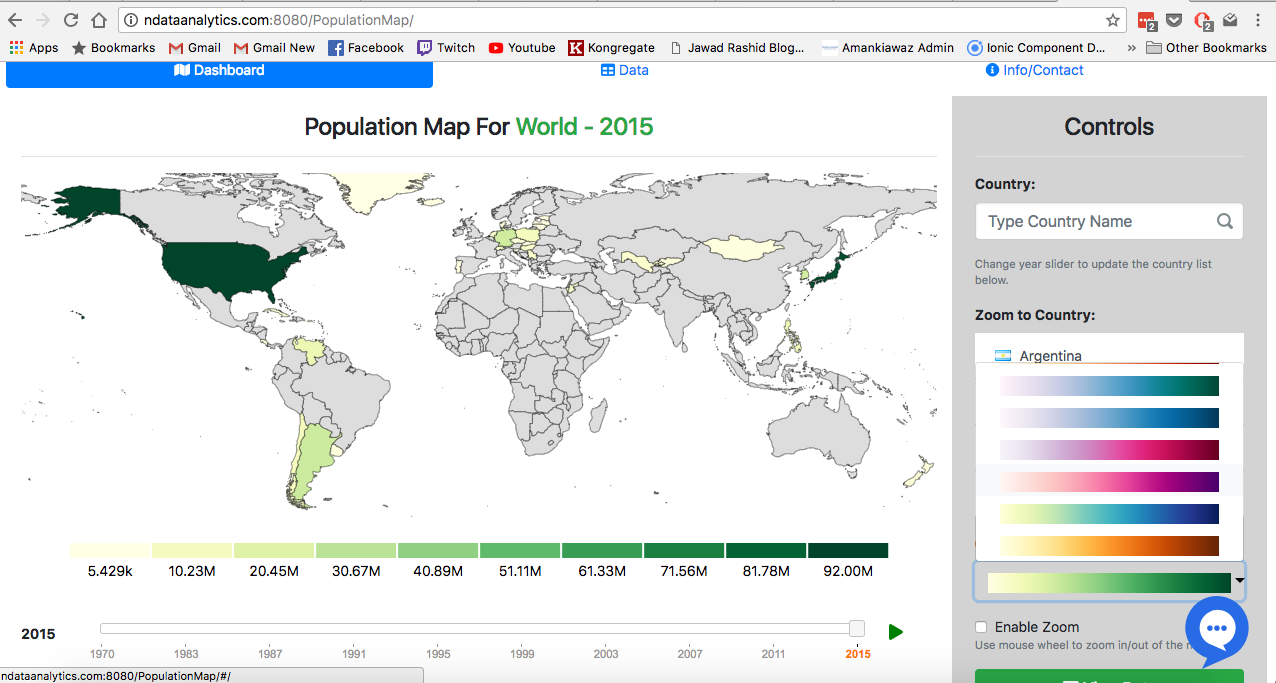 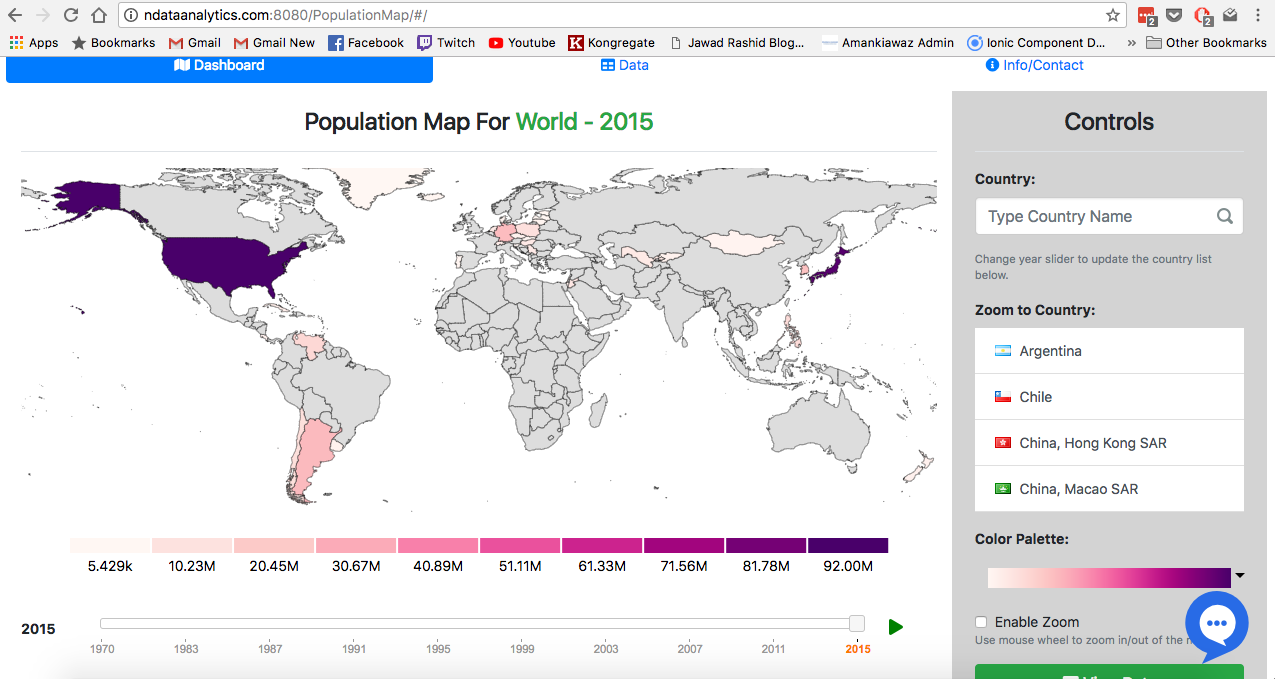 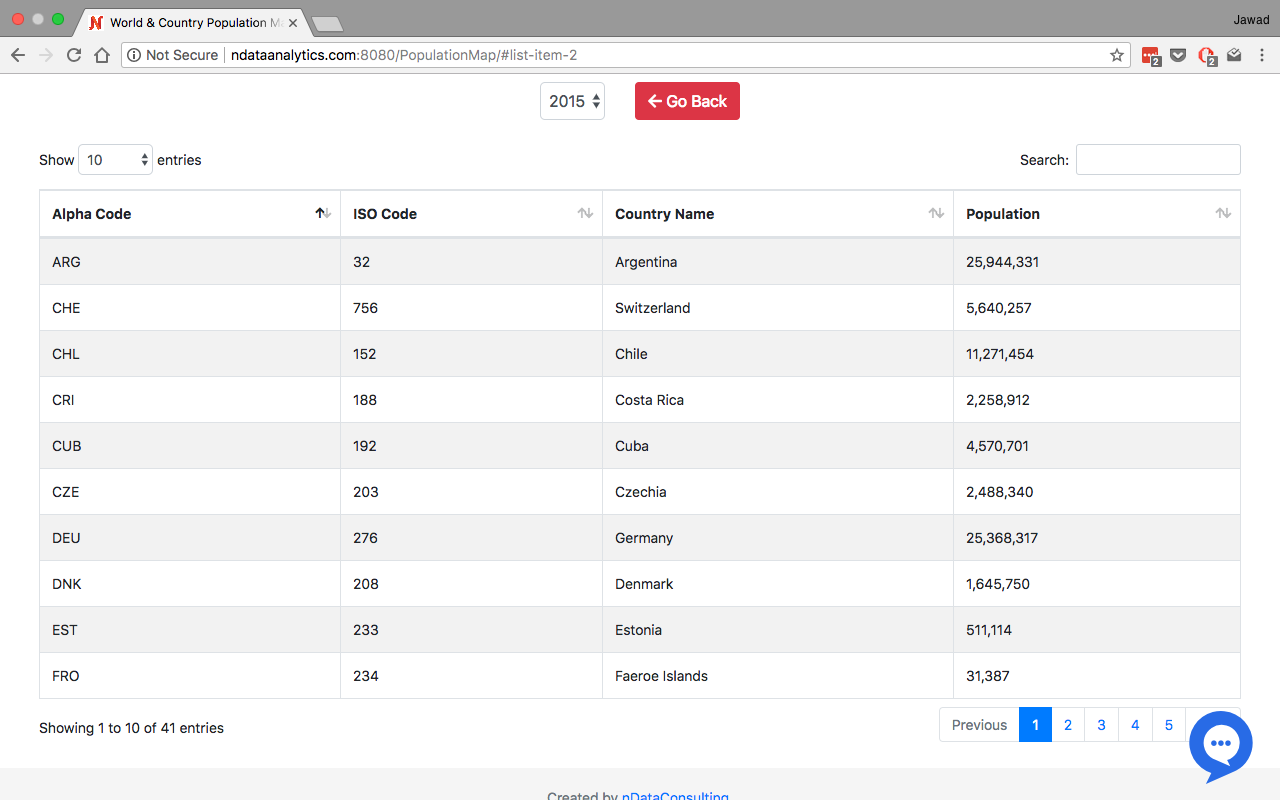 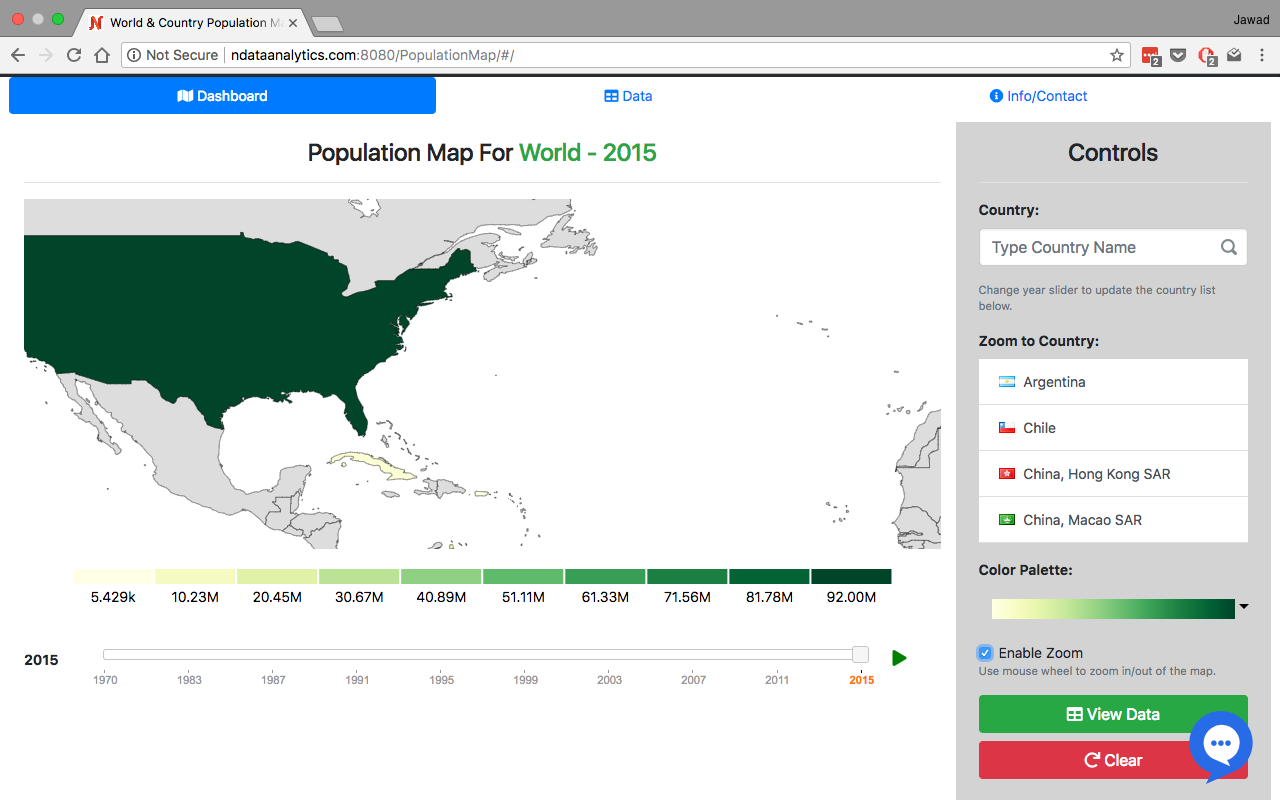 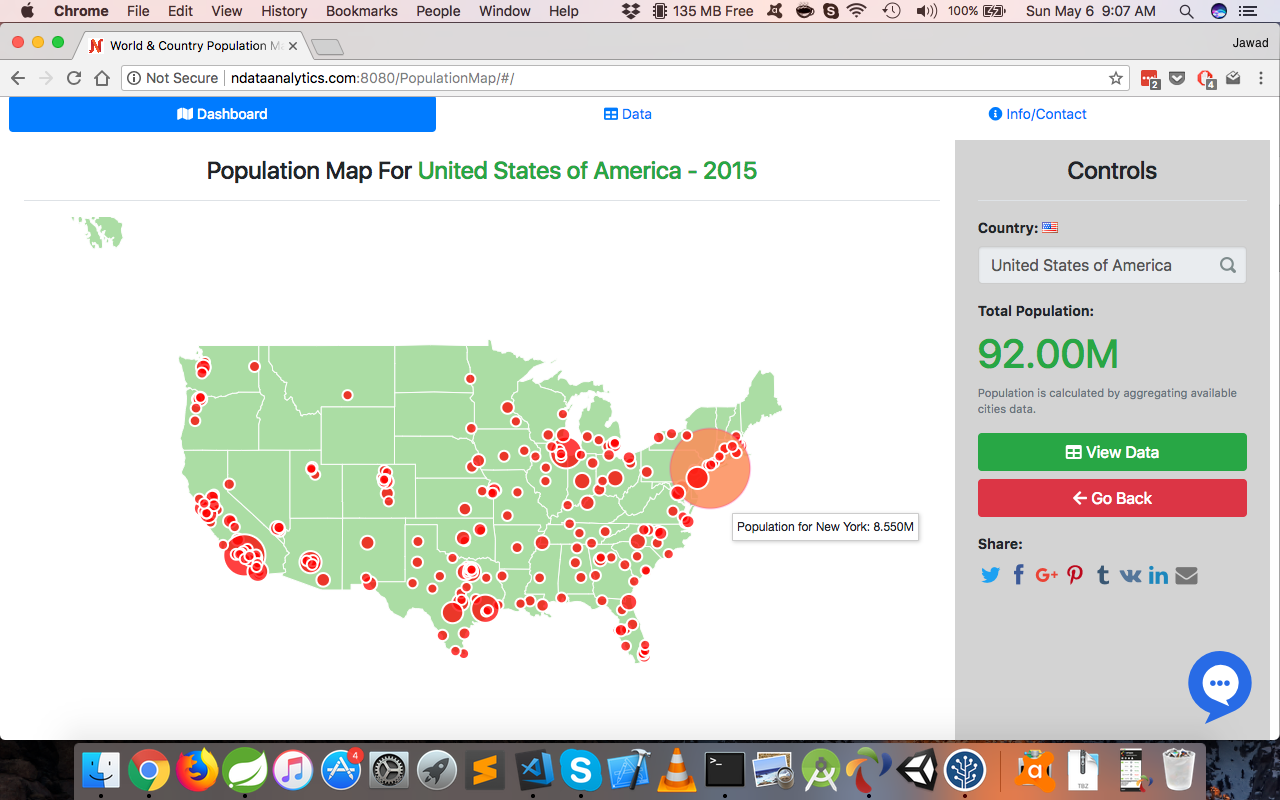 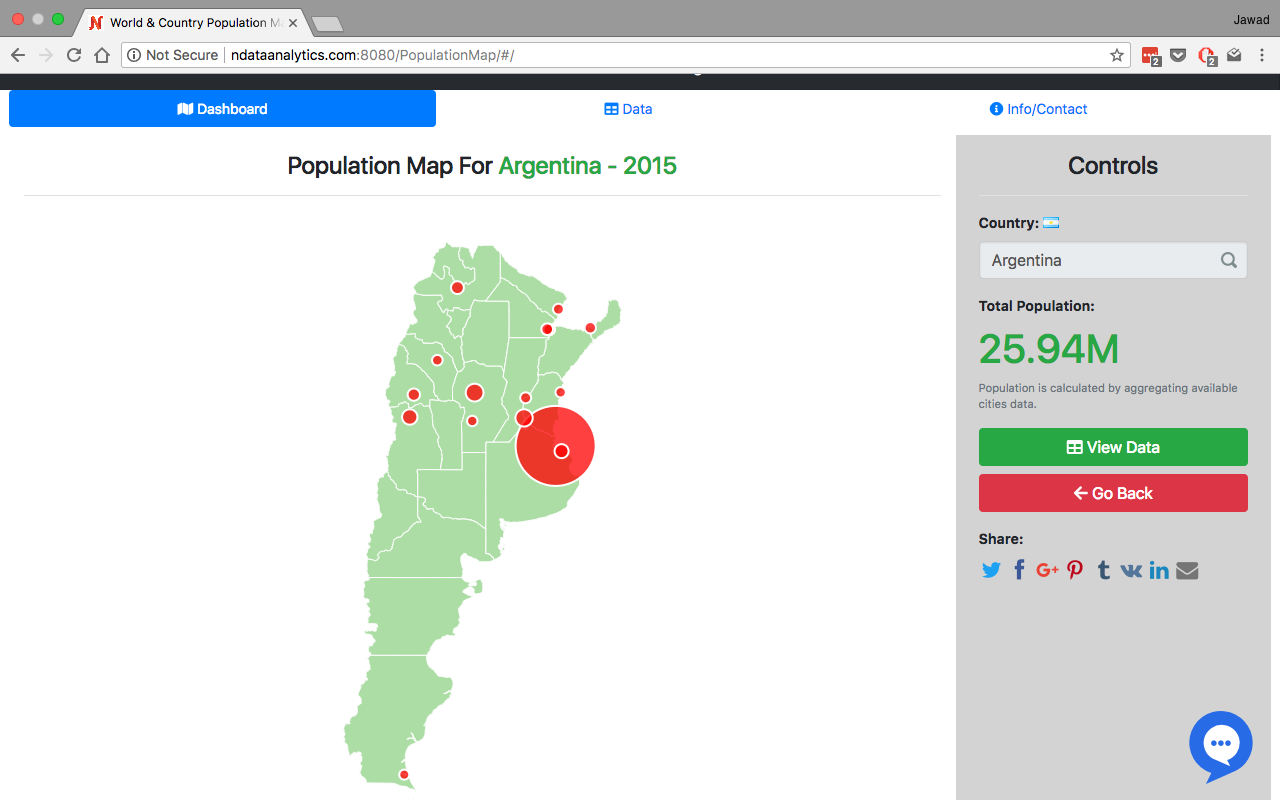 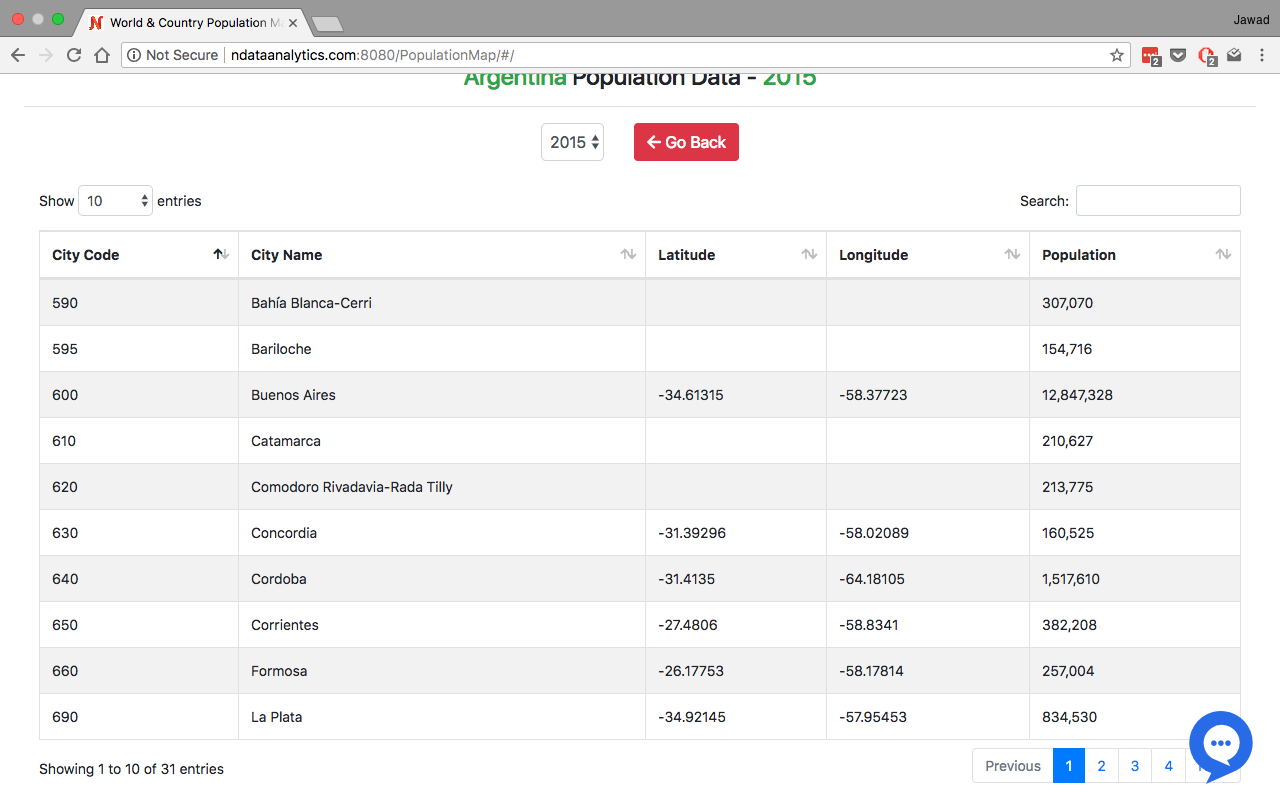 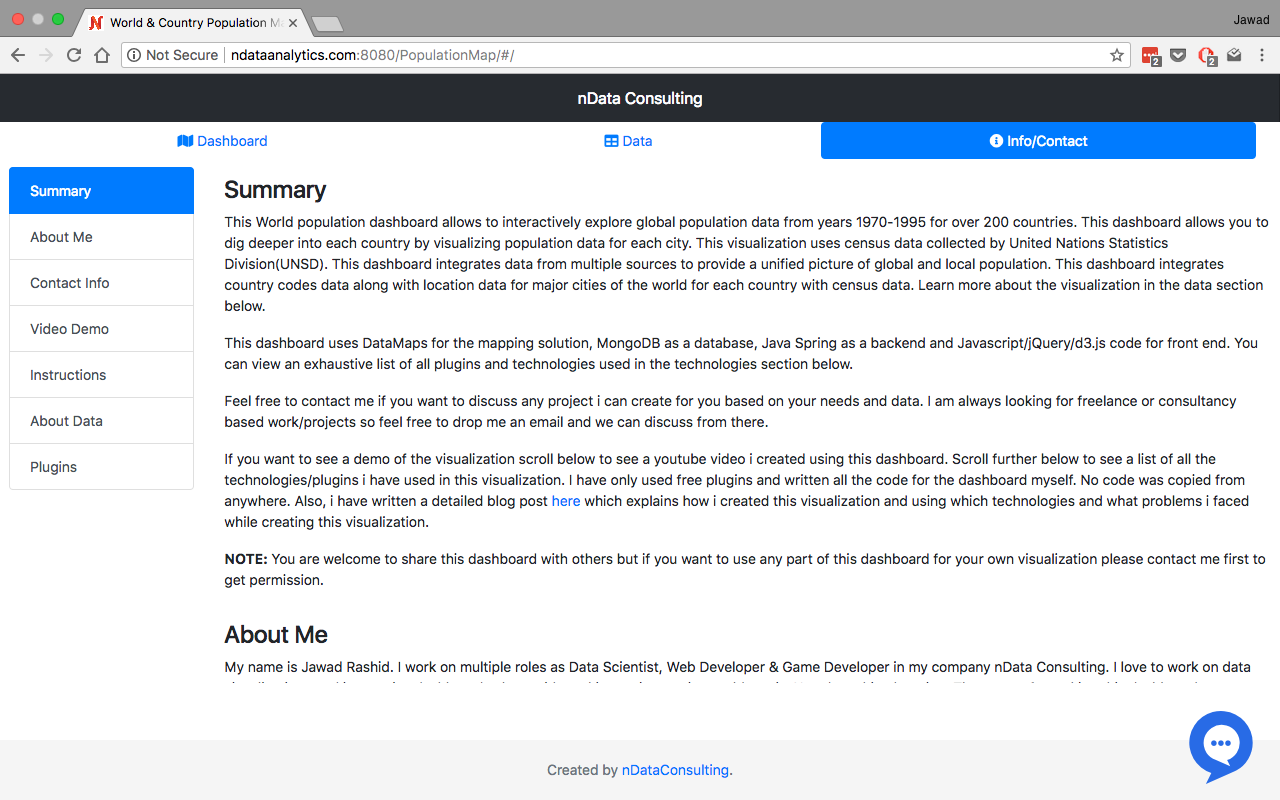 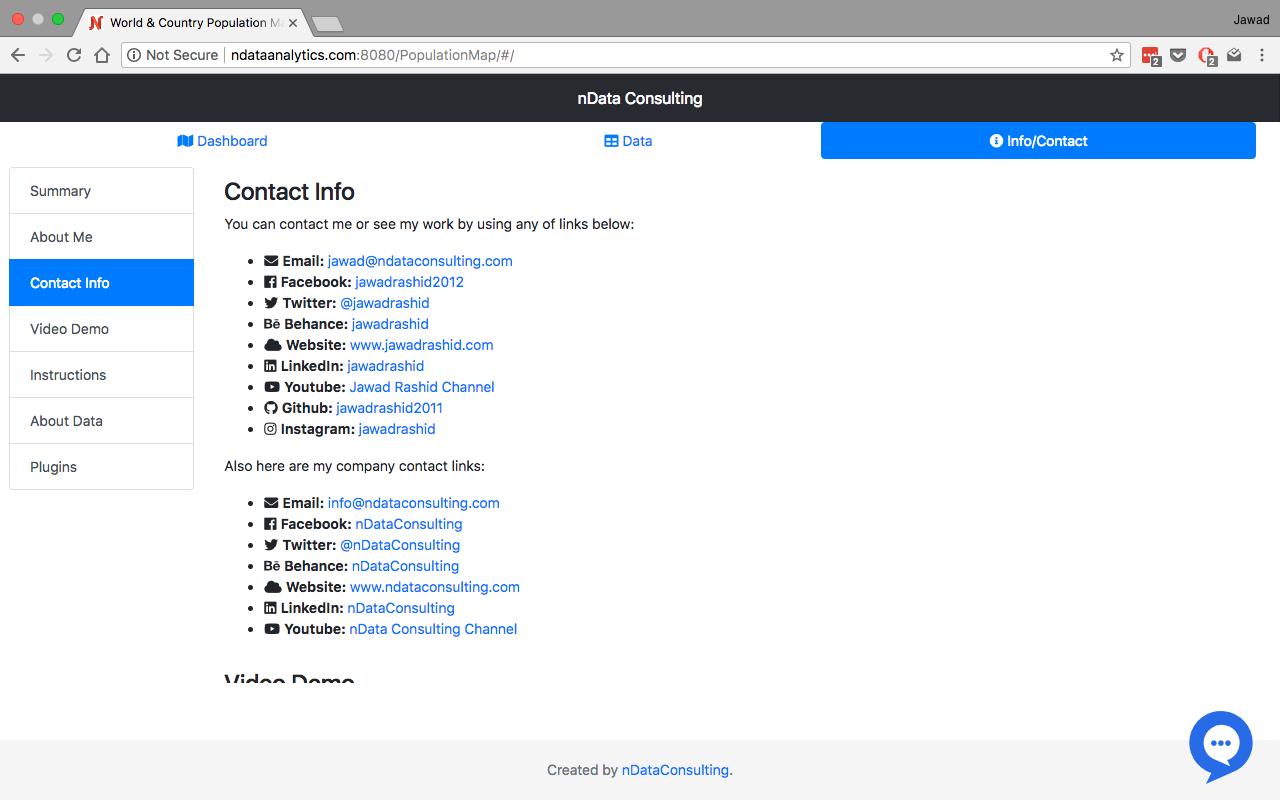 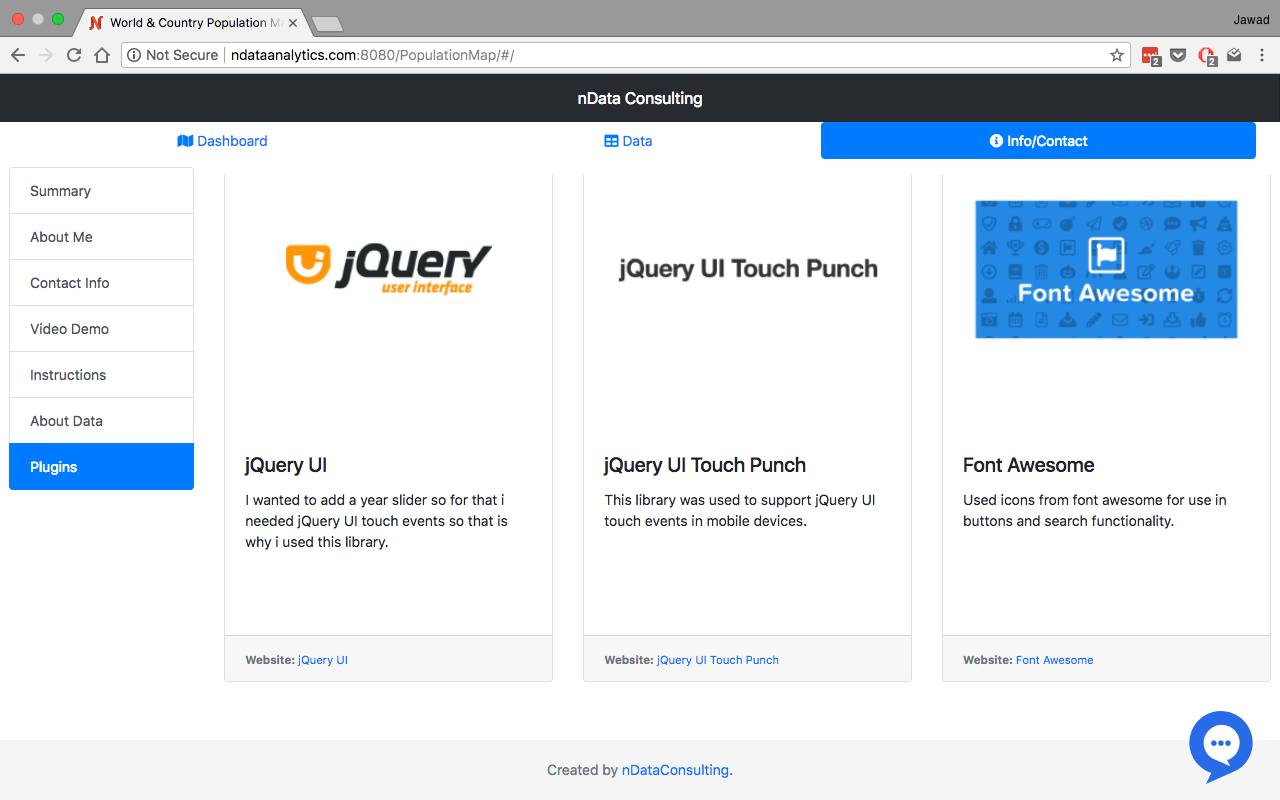 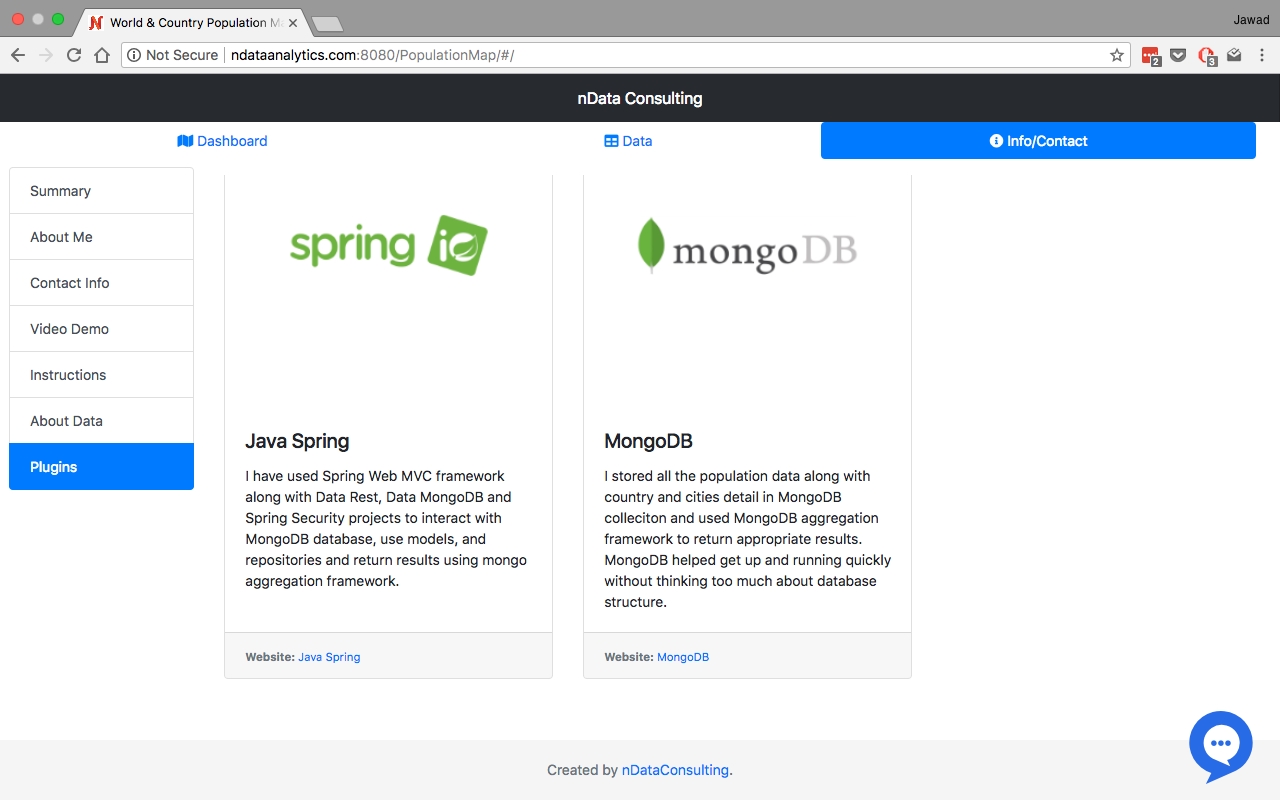 You can contact me or see my work by using any of links below:

Once i decided the dataset i needed to process the data and bring it in a database. I got the data from the website in csv format. I data cleaned it to remove any unncessary columns or rows and then imported the resultant data in MongoDB. I choose MongoDB as it was easier to get up and started with mongo and mongo has import utility which allows import csv into a Mongo collection.

I needed a way to select country for which i can show more detail. I looked at using select elements in the beginning but felt that the UI would be very poor with 200 countries in the dropdown. So i decided that i needed a dropdown and that dropdown could work with local source and can be responsive. So after searching i found EasyAutocomplete http://easyautocomplete.com/  which allowed me to select a dropdown using autocompletion and provide it the countries i want to be searchable. I choose to customize the dropdown by writing a wrapper above it as i wanted the dropdown to be a separate module and wanted enhancements. I had to make multiple enhancements to make it even more customizable. I found flag icons from easy autocomplete example as well which i choose to show above the autocomplete for countries.

I wanted to use a year slider to explore population data for countries and the world maps. There was few restrictions for year slider i wanted. One was that it had to be responsive so it would stretch or shrink based on available space. Also, another requirement was that not all countries had data for all years. For example some countries had data for 1995, 2007, and 2015 and no data in between so i wanted a slider where i could only select the years i give it and not values in between. The normal html slider would not work as it was not responsive as much and also for normal html5 slider the step are fixed so i could not do something like years 1995, 2007 and 2015. I looked at other sliders. I found one bootstrap slider which could have worked (http://seiyria.com/bootstrap-slider/) but the problem with this slider was that it worked only for bootstrap 3 and was not fully compatible with bootstrap 4. After finding a lot of sliders but that violoated the restrictions i had i found these two sliders http://ionden.com/a/plugins/ion.rangeSlider/demo.html and http://www.bestjquery.com/?jpubA5it. Both of them were responsive and both of them allow custom slider data like giving values and it would show only those values. In the end i found jQuery UI Slider to be the better option due to customizability so i chose that. This slider allowed customizability of number of ticks and giving custom data. I had to write code on top of that to make it a more responsive so for medium screens there were lesser ticks so it was readable and for smaller screens ticks would decrease so that it was understandable. This worked after customzibility. One problem in the year slider i faced that because of things i was using i was not able to get the slider to update correctly if i chose to change the years and the tick marks on the fly from one set of values to another as the refresh code provided in the documentation updated the ticks but not the data correctly. So i had to destroy and recreate the slider every time new data came in for the slider(Not a great solution but worked fine in this case). Another issue was that as this was touch based slider it was not working in mobiles. So from past experience i included jQuery UI Touch Punch code (http://touchpunch.furf.com/) which allowed mobile support for jQuery UI touch controls which fixed my problem with mobile.

Other than that there are plugins for sharing, chat etc which are easy to understand. There was room for a lot of improvement and there are some minor bugs but for a demo project this is good enough. I could have found a dataset for population of cities which was more accurate instead of aggregating cities. Also, i could have added graphs to go along the visualization but choose to not to do that as i have already done in a previous project here http://ndataanalytics.com:8080/ClusterWebProject and also i was out of time. There are a lot of optimizations but for now i am finished with this dashboard. This was a great learning experience for me. I will be creating more dashboards like these but with different designs. My thoughts are that in the upcoming months i will make these dashboards but each with different mapping libraries like Leaflet, google map, and other libraries. Each different databases then Mongo like trying Graph databases and other databases and each with different front technology like React, Angular, Vue.js etc and different server framework like ruby on rails, python frameworks, R, etc. I would like to do similar work in dashboards, visualizations and data analysis as that is my main focus as Data Scientist. If you want to discuss any projects you have which i can work on please contact me at [email protected] or use my other contact information given at start of this blog post and i would be happy to discuss prospective project i can develop for you.